The California Kid: Profile of a Hot Rod 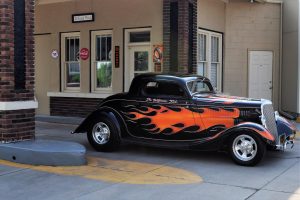 Among the most significant hot rods of the 1970s was Pete Chapouris’ chopped 1934
Ford coupe, dubbed The California Kid.

It starred in a television movie, bucked the then-dominant resto rod trend, and played
an important role in the founding of Pete and Jake’s Hot Rod Repair, one of the first
modern professional rod shops. Thanks to Hot Rod magazine’s Gray Baskerville,
Chapouris met Rod & Custom staffer Jim Jacobs, who was pounding out his own
chopped 1934 Ford coupe at the time. With similar tastes, the pair became fast
friends and soon started their own hot rod business.

Pete’s hot rod gained its name from a 1973 ABC made-for-TV movie starring Martin
Sheen. The movie, along with the motion picture American Graffiti from the same
year, spurred hot rod enthusiasm and nostalgia, and reminded a generation how a
hot rod should look and sound. 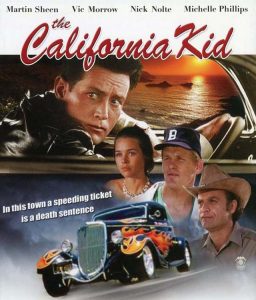 Pete bought the car for $250 with the top already chopped. He dropped in the Ford
302-cid V-8, FMX gearbox, and quick-change rear end from a previous rod, and had
Manuel Reyes apply the prominent flames.

The car originally had a set of Halibrand mags, but they were swapped for red
steelies with beauty rings for the movie. The movie producers also had the signature
“California Kid” lettering applied to the doors along the belt line.

Today, The California Kid resides with Jerry Slover of Peculiar, Missouri, who
acquired it in the 1986 purchase of Pete & Jake’s business.

Jerry was one of P&J’s original customers and is a longtime hot rodder. The quick-
change is gone in favor of a Ford nine-inch rear end, and several of the chassis
parts have been replaced. After all, the car has more than 90,000 miles on it! Now
reunited with another great hot rod, Jake’s Coupe, The California Kid has found a
good home, in Peculiar, Missouri.

What car dealership has stuck in your mind over the years?www.facebook.com/GMPhotoStore/photos/a.2461228280689376/2988991614579704/Gage Oldsmobile was a large dealership that was located on Woodward Ave in Ferndale, MI. outside Detroit. Gage’s neon display was one of the best in the Detroit area. Gage Oldsmobile was also a landmark when cruising Woodward back in the day ... See MoreSee Less